The beginning of May was a bit slow with training but it is picking up again now.  Helen Phillips came down to do a weekend workshop for me and so I managed to work Ragnar on the Sunday.  We mainly concentrated on teaching him to look towards the gunshot and expect a retrieve.  I have taught sit to shot and he does this really well but is very focused on me so isn’t marking the retrieve.  We set up an exercise where Ragnar was sitting facing me and then a helper fired a shot and threw a dummy.  I released Ragnar to go whilst he was still looking at the dummy and before he looked back towards me.  I will continue to work on this so that he automatically marks the retrieve.

We also did some hunting and finished off with a nice long marked retrieve.  Ragnar is remaining steady which is great.  No running in.  I have some exercises to work on to improve the way that Ragnar casts off to hunting as he can get a bit too fixed on his green ball in my pocket.

We also had our first session with Geoff shore at his rabbit pen which was really good fun.  I am very pleased at how Ragnar coped with all the Chickens and Pheasants that were in the pen.  We did lots of sit to birds moving and then moved on to retrieving dummies from near the birds and doing some nice memories.  He did everything I asked of him really well, it is lovely to see all the foundation behaviours coming together in this situation.

We then went out of the pen and did some more marking with shot.  We also introduced Ragnar to shot pigeons.  He was not terribly impressed and didn’t pick it up so I put it in a stocking and he picked it up then.  Geoff gave me birds to take home so we can work on teaching him to pick up cold game during this month.

We went for a walk mostly on the lead this morning which we haven’t done for several weeks, partly because I have been really busy and partly because Ragnar’s LLW seemed to be deteriorating and I didn’t have time to work on it.  I was having to use his headcollar to manage it too much which wasn’t fun for either of us.  It appears, however, that a bit of benign neglect and not letting him practice the unwanted behaviour has fixed it!!!  He was probably struggling with high testosterone levels or some other teenage inability to concentrate.  Sometimes it can help to leave a behaviour alone for a while and come back to it at another time.  I know I need to focus on teaching off lead heelwork with him as he can do it when Erik is there but not on his own!  Lots still to do to proof the LLW too but great to see that it is back to normal again now.  During our lead walk I find green areas in the estate where I live and let the boys have a bit of a run and play.  This helps to break up the lead work for them.  We have several routes where we lead walk, free run for a short time then more lead work as we join up the green bits.  On one of the green bits this morning I spotted a cat with an easy, away from the road escape route.  The cat had spotted us arriving so I let the boys off the lead.  As the boys pottered over the cat ran off, I tried my stop whistle and both of them stopped immediately. 😊  Very pleased with them.  I have to take these opportunities as they present themselves.  My dogs don’t get much exposure to small furries running away so I have to improvise and use what is there!

I have done some work with one of the pigeons in a stocking and Ragnar was happy to pick it up and deliver it to hand.  It took some work and we went back through the clicker retrieve with it so that he could work out that it was a retrieve article.  More work required on this so will carry on with the next bird soon.

The exercise that I am working on with Ragnar to help with his hunting pattern is teaching him to do a figure of eight round two cones, with him turning away from me on both sides.  I am working on building his understanding of my body language so that he starts to do the figure eight pattern immediately that I cue it rather than standing looking at me expecting a ball!

So far, I have got the behaviour working well just on body language in the training cabin, out on the hard standing and on the short grass near the training cabin that is fairly low distraction.  He will work for food in these places and I am trying to build up to him doing this out in the rest of the field.

Along side teaching the figure eight pattern I am also going back and revisiting the ‘get it’ bowl exercise which teaches the dog to be able to work with remote rewards that are available all the time but they can only take the reward when cued.  We did some revision using food in the bowl and then worked up to Ragnar’s favourite ball in the bowl.  Initially he only had to do easy behaviours such as sit, down, hand touch.  Then I moved it up to retrieving past the bowl.  He struggled with that to start with but he is getting more reliable now.  My ultimate aim is to teach him to do his figure eight pattern with the ball in the bowl so that I am sure that he can cast off and work in the presence of the ball without the behaviour falling apart.

I have done some more heel work training and we are making slow but steady progress with that.

I had a session training with a friend and continued to work on orientation to shot and dummy throw whilst remaining steady.  Ragnar seems to be getting the idea more now.

We have done a couple of crate games sessions and Ragnar is managing to stay in his crate with the door open with more challenging things happening.  We worked up to me throwing dummies as a distraction for another dog doing heel work.  He came out once but managed to stay in after that.

I have worked for several more sessions gradually working on moving the figure eight exercise out on to the grass area.  This is going well and yesterday I introduced the get it bowl with a ball as a reward/distraction.  This was very difficult for spaniel brain.  Ragnar could go around the cone but not turning the correct way initially.  He wanted to always be facing the bowl.  Some judicious luring and working on one cone at a time produced some correct behaviour but it is going to need much more work to become fluent!  A good first effort from him though as I thought that he wouldn’t be able to work for food with that set up but he was still taking food 😊

We also have been carrying on working on retrieving past a ball in the get it bowl.  This is getting less troublesome to Ragnar so now I am being selective with when he gets the ball.  If he delivers properly then he gets the ball.  If he is a bit gung-ho and chucks it at me then he either gets nothing if it is really bad or sausage if it was an OK but not great delivery.  I am also working on him not assuming that after the click he is automatically going to get the ball.  He was hearing the click and automatically running to the bowl.  If he did this, I just received the ball from him and put it back into the bowl with no playing with it.  He is starting to wait now and only go when he hears ‘get it’.

Lots of great opportunity to work with a high-level distraction/reward and he is trying very hard, bless his cottons!!  I can only do short burst of this as it takes so much effort to get it right.  I am seeing good progress and I can see that he is starting to understand that managing himself around the ball is a much quicker way to get the ball play.

This is great news for future steadiness as there is more value in the balls than in birds 😊  He likes to work the birds and is really focused and driven to do the job but he is ‘nuts’ for the ball, which is what I have worked hard to achieve so that stop and steadiness around birds has a better reward than actually getting to interact with the birds.

Also, if he can achieve self-management around his ball then it will be easier for him to be able to do the same around birds as his arousal levels are less.  Cognitive dog = controllable dog 😊

Day 2 of working the figure eight with the ball in the ‘get it’ bowl.  Better fluency today but still not great.  Less luring required and less dashing off.

Better consistency with hand delivery past the ball today, also less dashing off.

Added some retrieves using different dummies today, no ‘get it’ bowl as Ragnar still needs to work on picking up a variety of things, to help with the cold game pick up.  Note to self, need to do this sooner with the next pup!  He picked a Partridge dummy and a pheasant dummy first time with no issues 😊  These are both rugby ball shaped and made of canvas.

The picture is of the boys hanging out at the training cabin, pre-grass seeding! 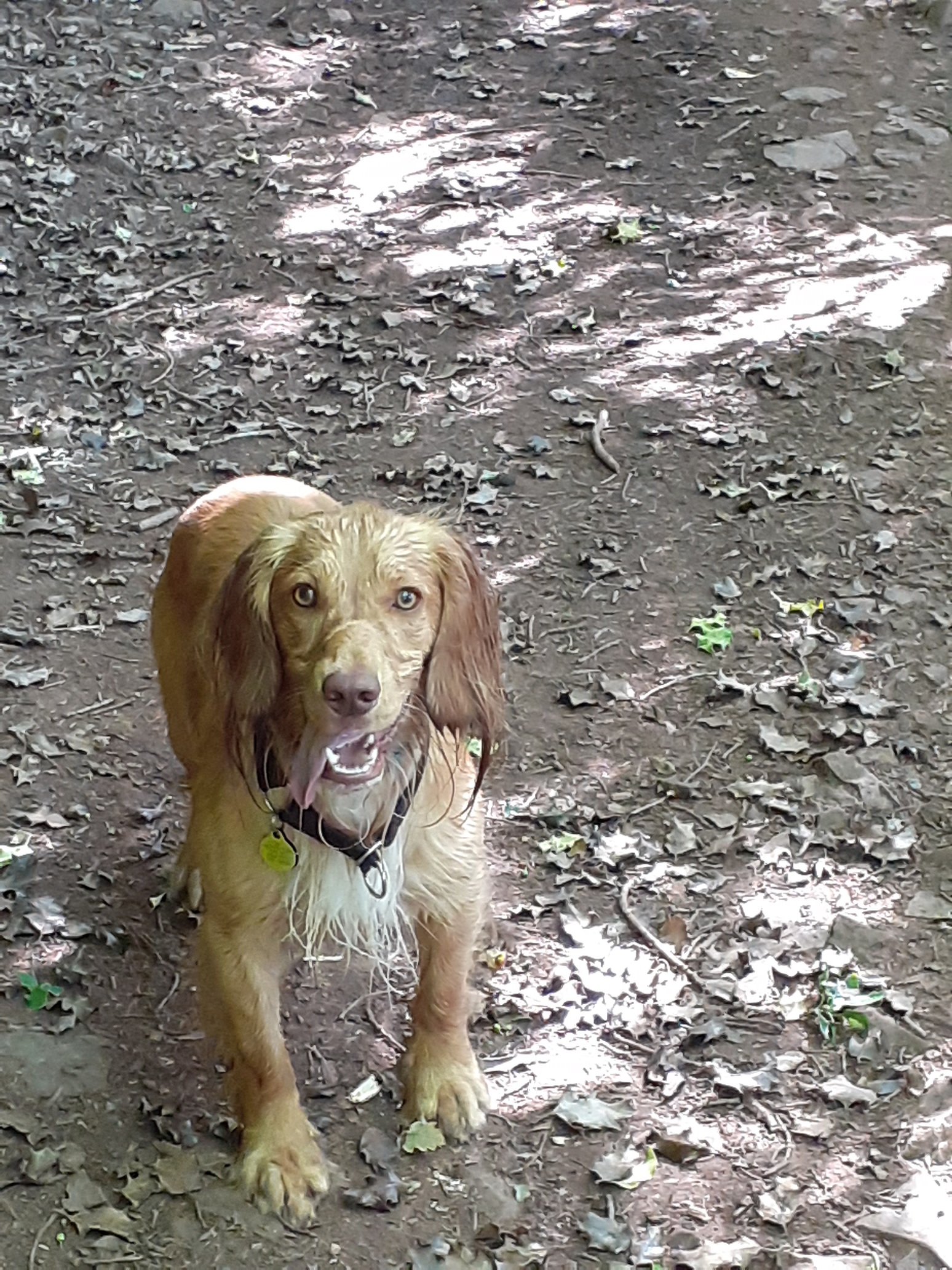